The best equipment and method of LCD touch screen reworking

The best equipment and method of LCD touch screen reworking

The efficiency of molybdenum wire cutting method is very low, and the damage to the cut parts is large, which leads to low yield rate of reworking products.

The degumming effect of liquid Nitrogen freezing method is good, but the consumption of liquid nitrogen is too large. The danger is also higher because the liquid Nitrogen can instantly reach up to -196℃ low temperature (ideal gasification temperature). If accidentally spattered on the workers' skin, it would immediately cause skin necrosis. Similarly, because the liquid Nitrogen sprayed on the touch screen glass surface and it instantly produced -196℃ low temperature, which will make the glass sharply shrink and burst, while the other parts of the LCD interior can not shrink because the other parts of the LCD have not felt the low temperature, which greatly increases the probability of glass burst and leads to a low yield rate of reworking products.

Although the temperature of refrigerator freezing method is not as low as liquid Nitrogen, but because its degumming principle is that the cold air in the chamber is exchanged cold and heat with the touch screen, the cold and heat exchange process is smooth and mild, and the LCD screen blasting phenomenon will not occur. Thus it greatly improves the yield rate of reworking products. It also does not have the potential harm like liquid Nitrogen, safe and reliable. It only needs electricity to run. The use-cost is low.

LXBX series touch screen rework refrigerator has a variety of temperature from -80℃ to -185℃ and a variety of volumes from 50L to 650L for users to choose from.

LXBX series touch screen rework refrigerator has a variety of volumes from 50L to 650L for users to choose from. 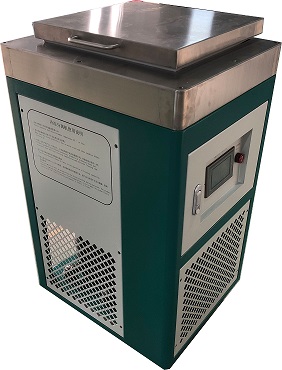 LXBX series touch screen rework refrigerator has a variety of temperatures from -80℃ to -185℃, for users to choose from.

The temperature controller has password locking function in case of mistuning by the irrelevant person.

The whole refrigeration system has stable performance and can be operated continuously 24 hours.